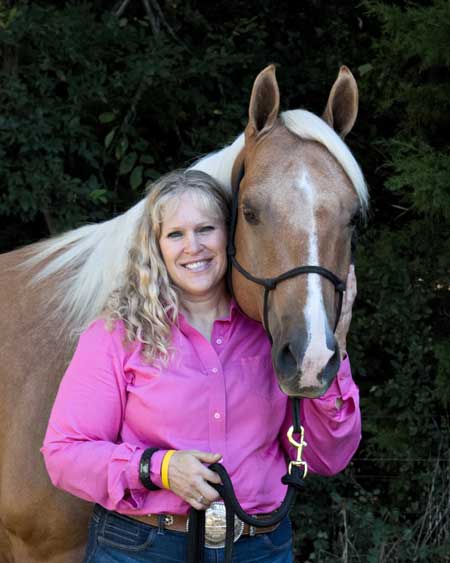 A Nebraska native Brenda was raised on her family owned dairy farm. She received her first horse at age eight and has been pursuing her passion for horses since. Early influences in Brenda’s education created in her an appreciation for the all-around horse. We all want a horse that is a pleasure to work with- a true partner. This goal takes time, patience, perseverance and a love for the horse! She is an active promoter of Cowboy Dressage and its message of Soft Feel!

Brenda loves to teach and strives to share with her students all she has learned to develop the horse with mental and physical longevity in mind. She has worked with different breeds of horse and in varied disciplines. In both past and present, she has been blessed with some amazing employers/instructors, including four Hall of Fame trainers!

First employed by legendary horseman Jack Brainard in 1992, at his Diamond B Ranch in Aubrey, Texas, Brenda continued to work at his Tioga and Whitesboro locations. For 24 years, she has applied his cross-training program of using dressage basics to develop a strong foundation, the flying lead change, and reining maneuvers on his two year old reining futurity prospects. Brenda has also been a demonstration rider in many of Jack’s clinics over the years.

Lucky to also have had coaching from Eitan, Garn, and Lyn, Brenda is looking forward to sharing this fun and educational discipline of Cowboy Dressage with new riders.

A small handful of the many influences Brenda would like to gratefully like to recognize for mentoring her in her journey of horsemanship would include Mark Gratny,  Ann Bradley , Jerry Diaz, Bill Perkins and John Carter, Earnest Wilson and Manuel Trigo. Brenda is also very thankful to Stephanie Millham for shining a light on her path of study, for keeping the old traditional, classical principles alive to biomechanically properly develop the horses mind and body, and rehab injuries.

Brenda loves to compete and coach her students in the show pen, and has done this from local to national level, including competitions while living and working in Germany. Brenda has stepped into the show pen in many different Breed shows, and in many types of english classes (hunter, dressage and conformation), and all-around western classes (including reining, cutting, SHOT, and Cowboy Dressage).

Brenda holds an Associate of Applied Science in Equestrian Science from Northwest College, and has earned a Bachelor of Science double major in Equestrian Studies and Sociology with a minor in Psychology from Park College.

Items in Your Cart

Your cart is empty