Thank you to our generous sponsors:

A Special Sponsorship in Loving Memory of Wasyl Malyj Ph.D, a dear friend of Cowboy Dressage 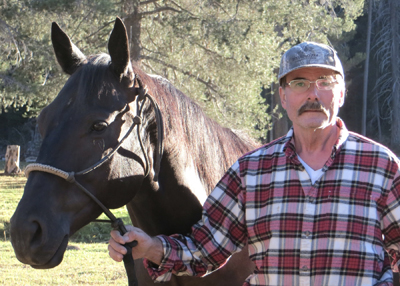 Wasyl Malyj, Ph.D. initiated and led the development of genetic testing of horses and other animals at the UC Davis School of Veterinary Medicine. His work resulted in genetic testing for parentage verification in labs world wide. That changed the entire industry and established a new level of research to elucidate genetically based equine diseases and traits. His primary goal was always to utilize knowledge of the equine genome to help improve the health of future generations of horses, and to promote understanding by riders of their mounts. Initially Wasyl’s work introducing genetic testing into the equine world was met with great skepticism and resistance from labs, including his own. All labs at the time utilized Serology (blood) based testing for parentage verification. Articles arguing that Wasyl was pushing an unnecessary and inferior approach were written, and law suits were threatened. Fortunately he was far ahead of others in the field both in terms of his knowledge of genetic research techniques and his understanding of advanced equipment. He was able to convince Dr. Fred Murphy, then Dean of the Veterinary School at UC Davis, that genetic testing was the way to go. As a result, Wasyl acquired the first genotyping machine on campus, a very expensive item. The testing was worked out, and thanks to the supportive stance of the Director of the Veterinary Genetics Lab, and the AQHA and its Board of Directors, genetic testing for parentage verification was implemented successfully with 99.9 percent reliability of results. The need for blood tests was replaced by simple pulling of mane or tail hair, and storage of generations of equine samples was greatly simplified. Soon all major labs were using the same technologies.

Thus began elucidation of the equine genome which was fully sequenced in 2007. The opportunity for new avenues of research into equine disease using DNA testing was achieved. Later Wasyl’s interests led him to a faculty role in Health Informatics at the UC Davis School of Medicine. He remained very proud of his impact in generating the new field of Equine Genomics and continued an active interest. When he became familiar with Cowboy Dressage he realized he might help identify the learning moment between a horse and rider. From discussions with his wife, he thought that collecting real time data from non invasive physiological measures, especially Heart Rate Variability (HRV), would contribute to a clearer understanding by riders of “feel” in good horsemanship. Done well such feedback in conjunction with good instruction could significantly benefit horses and riders by facilitating better partnerships. At the time of his death in 2014, Wasyl was working on a device to collect such data reliably from humans and animals and analyze it in real time to provide immediate feedback. Recognizing the significance of such things as shifts in cardiac rhythms associated with the “ah ha” moment in learning is application for his work. It is potentially as applicable to horse and rider interactions as to teacher-student interactions, to name just a couple of possibilities for such measures. Wasyl was a lover of horses, dogs, cats and animals in general throughout his adult life. He was exposed to enough of the pros and cons of training animals that the possibility of improving the understanding and communication involved interested him tremendously.

Wasyl’s primary research interest in human and animal medicine was focused on two areas: predicting the onset of a health problem before symptoms are obvious.: e.g. heart attacks, strokes, pneumonia, etc, and doing pattern recognition searches on huge databases of medical information to find matches that would inform both diagnostics and treatment. Approaches he and colleagues presented and promoted at national conferences are generating results seen frequently in the medical news of today. Wasyl knew that success with the work he and others were pursuing was rapidly approaching fruition. Someday soon some of his vision will be realized by others possessing the right combination of talent, interest and initiative.