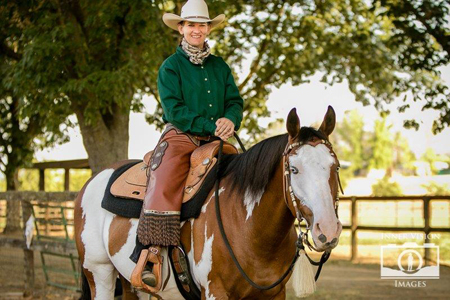 I grew up in Indiana and got my first horse at age 8, a 2yo quarter horse mare who taught me to survive! I think of her often and wish I had known better how to help her. After winning my first pink ribbon I was hooked on horses. My 4-H leaders Kay Lancaster and Beth and Marty Moon thought I was going to get killed barrel racing and jumping and talked my parents into trading Misty for a gelding named Ben who would be my partner and teacher for the next 19 years.  My parents gave me the opportunity to ride in many clinics with trainers such as Lynn Palm, Sally Swift, George Morris, Clark Bradley, and others and Beth and Marty took me under their wing as we traveled to horse shows every weekend.  Ben and I competed in nearly every AQHA class from the 10 and under division through the Amateur division.

From 1988 to 1991 I attended William Woods College in Missouri. Gayle Lampe introduced me to the world of saddleseat and American Saddlebreds and Kenny Burgdorfer worked on my jumping skills.  I worked at a local boarding barn starting over 100 colts in 3 years. I rode with Jon Barry, Gil Galyean, Jamie Bissell, and Richard Shrake and learned what I could from each.  I graduated with Bachelor degrees in Equestrian Science and Business Administration and was on my way to a career with horses.  Unfortunately two months before graduation a major car wreck ended my riding career for the next two years as I underwent physical therapy.  At last I found a doctor who told me to try riding again and I was back in the saddle.

I was working for a finance company at the time and transferred from Kansas City to Dallas to San Ramon, CA in 1999. I was concerned with the way the horses were being treated at the horse shows and decided to leave the horse show world.  What would I do?  This had been my passion for my whole life.  My answer came in 2001 when I met Ray Hunt.  I spent the next 7 years trying to soak up as much as I could.  Ray could say more with a nod of the head or a wink and his love for the horse was obvious.  Through Ray I was introduced to Eric Thomas and experienced the thrill of riding reiners and cow horses.  In 2009 the horse world lost Ray and I was adrift again.  I tried riding with a few more trainers but none had the horse’s best interest in mind like Ray.  In 2010 I met Gary Panighetti, my fiancé, and I learned what a real partnership is.  Finally in 2013 I met Lyn Ringrose-Moe at a Cowboy Dressage clinic in Woodland and my world was changed.  I found my people!  A whole group who are proud to say they love and respect their horses and each other.  Gatherings to highlight the progress each horse and rider team is making in their quest for good horsemanship.  Appreciation for all breeds and types of horses. I am home!