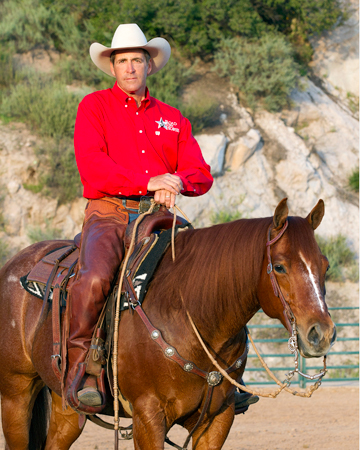 For over 35 years Richard has dedicated himself to honing his horsemanship skills and to passing this knowledge on to others. Richard’s credentials extend from the rodeo arena and high desert ranches of the west to being a highly sought after trainer, horsemanship clinician, and expo presenter.

Richard Winters’ horsemanship journey has earned him Colt Starting and Horse Showing Championship titles. Obtaining his goal of a World Championship in the National Reined Cow Horse Association became a reality where he is also a AA rated judge. Another of Richard’s horsemanship goals was realized with his Road to the Horse Colt Starting Championship and then returning for 5 consecutive years, as the Horseman’s Host. Most recently, in 2015, Winters’ has earned the NRCHA Hackamore Circuit Championship title in Pueblo, Colorado. Richard was also the Limited Open Derby Champion in Paso Robles, California.

Richard Winters Horsemanship television show can be seen on Dish Networks HRTV- Channel 398. You can also connect with Richard on Facebook and YouTube.

Richard and his wife Cheryl reside in Reno, Nevada.

For more information about Richard Winters Horsemanship and the learning opportunities available please go to www.wintersranch.com.

Items in Your Cart

Your cart is empty