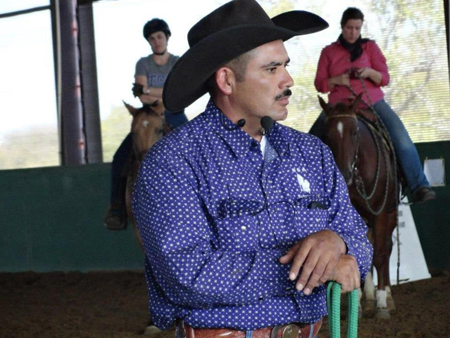 I was born on January 22nd 1970 in Ciudad Juarez, Chihuahua Mexico. As a child I grew up in an urban area with a normal city life. The closest I got to a horse was seeing them pull heavy handmade wagons collecting metal or selling different articles. I also would watch the old Spanish western movies and then, grabbing my mom’s broom, I would go outside with my friends and reenact them. Needless to say, I would get in trouble when my mom looked for it. My favorite thing to do was to visit my great grandmother’s farm. That’s where I knew that one day I would own a horse. At the farm, we knew that every animal there served a purpose; they either provided food or were for work. One day, I was playing on the family’s tractor and my dad pointed out some old mules that were there. He told me some stories about his youth and how when he was fifteen years old he plowed the field with mules. We then moved to California near the Los Angeles area. Life was very different, and every time I went back to my great grandma’s house in Mexico I would go borrow a horse from my uncle and I could not be happier.

I joined the military in 1989 and volunteered for deployment to Saudi Arabia prior to Desert Storm with the 1st Marine Division. My first job was corpsman with special units. I decided to become Marine Corps regs and was attached to a sniper platoon until I was honorably discharged in 1996, not knowing I had issues from serving. I was not the same kid that joined and was changed forever. I think God was watching over me and sent me this little sorrel quarter horse mare, that by her marking on her forehead, I named Seven. This was when my love for horses really began. When I felt bad inside, I would go and groom Seven. This helped me calm down and was the best therapy for my PTSD. During this time I joined a local charro team. There, I learned how to fall and fall I did with regularity, looking for that adrenaline rush that I was used to and needed. I became a bronc rider and performed the pasador de la muerte, the leap of death, which consists of jumping from a tame horse to a wild horse at a full gallop. I also did some steer tailing and a little bit of roping. I was the sports commissioner for the U.S. Charro Federation from 2004 to 2008. My job consisted of providing the safety for livestock and competitors while also making sure the event organizers were treating the livestock in a humane way.

An important part of my life came when I met master horseman Dennis Reis in 2008 at one of his tour stops. I liked his way of playing with the horses through communication and body language; this is where a lot of my whys & wherefores were answered. I realized I had being doing things not quite so right. I decided to become a member of Dennis’ program and began working on his program. Dennis has a program consisting of 4 courses, and each course has 4 levels. Ten months later, with no help from other instructors, but with a lot of support from my family and two very important persons in my life, I tested to get my endorsements. To my surprise and even Dennis’ surprise; I was able to get all twelve endorsements in the first three of the four courses. He told me at the time that I was only the second person to earn 12 endorsements at one tour stop. At that point, I was qualified to become an instructor. I attended a second tour stop where I earned two more endorsements from course four and a belt buckle with two diamonds. I have earned 14 out of 16 possible endorsements. About three months down the road, I was sponsored to attend the instructor course by the Reis family at their ranch in northern California.

Before all of this, I enjoyed teaching my horses not knowing that they were the ones teaching me. Looking back now, I was unfair to them for the lack of education on my part. That’s why every single day, through my work, I try to educate horse owners so they can be fair and have a great relationship with their equine partner. I continue to use some of the techniques learned from Dennis Reis while at the same time implementing my own techniques to help horses overcome their fears, in turn helping their humans to overcome their fears as well. My goal for all horse owners is to become a leader and a partner with their horse.