Three months ago, if you had told me that I’d be holding a pair of rope reins, throwing a western saddle around and practicing my slow jog, I’d have said you were crazy.

I’m deeply attached to my custom Devoucoux and my comfy tall boots, I’m the kind of person who gets home from the horse show and switches on the livestream so I don’t miss a thing, and my job, my actual job, is to follow the international five-star show jumping circuit. Other than the riders themselves, there are few people as immersed in show jumping than I am.

So no, I didn’t anticipate slow jogging all the way to the cowboy dressage World Gathering and Finals this past weekend, but an open mind and a “problem” horse will take you unexpected places.

A very long story made short, the horse in question—a well-bred Dutch Warmblood gelding named Sirocco—had been misunderstood for too long by the usual suspects: gullible and over-mounted amateur owner; dollars-focused, indifferent trainer; a second, well meaning, but just as over-mounted owner . . . it doesn’t take a rocket scientist to figure out why this once-willing jumper had morphed into a severely resentful animal.

Several years later, Sirocco was lucky to be donated as a school horse to the excellent collegiate program at Stanford University in Palo Alto, Calif.

I say excellent because Vanessa Bartsch, the team coach and manager at Stanford, genuinely cares about the past, present and future of every horse that comes her way. She pours her heart into ironing out the puzzles that come with each donated horse’s past. So when she found out that I’d crossed paths with Sirocco nearly six years before, she wouldn’t leave me alone.

She couldn’t get to the bottom of the puzzle that was this particular chestnut gelding, and when his favorite pastimes became depositing Stanford students onto the arena floor, or making them cry by dragging his feet into the middle of the ring and refusing to move, she started looking for another home for him.

Horses are so forgiving—to a point. But after tolerating years’ worth of spur and rein, kick and pull on repeat, most horses will lose their sense of humor. When Sirocco lost his, he coped by coming up with creative combinations of dullness, bucking tricks, and shoulder drops that earned him the “problem” label.

How exactly I agreed to become the caretaker of this beautiful, misunderstood horse is another long story, but suffice it to say, when I got him, it was clear he needed a big perspective change. Cowboy dressage (that’s cowboy dressage, not Western dressage, and yes, there is a difference) would never have crossed my radar if not for a friend with a private farm and a fervent, bordering on evangelical, passion for this emerging new discipline who took us in for the fall.

The open mind I mentioned came in handy as my friend, Joann Gillespie of Rawking Horse Ranch, showed me her curiously sized dressage court decorated with a circle of poles and oddly placed rails. Aside from straight lines and 20-meter circles, I would soon learn that cowboy dressage bears little resemblance to traditional dressage, especially if you look at the horse.

I’ve been a hunter/jumper rider for over 25 years, but this is where I began to get hooked. If I had to describe cowboy dressage in two words, it would be “soft feel”. Riding a responsive, forward moving horse with ultimate lightness on a loose rein with quiet legs is the holy grail of cowboy dressage, and it starts at ground level, literally. 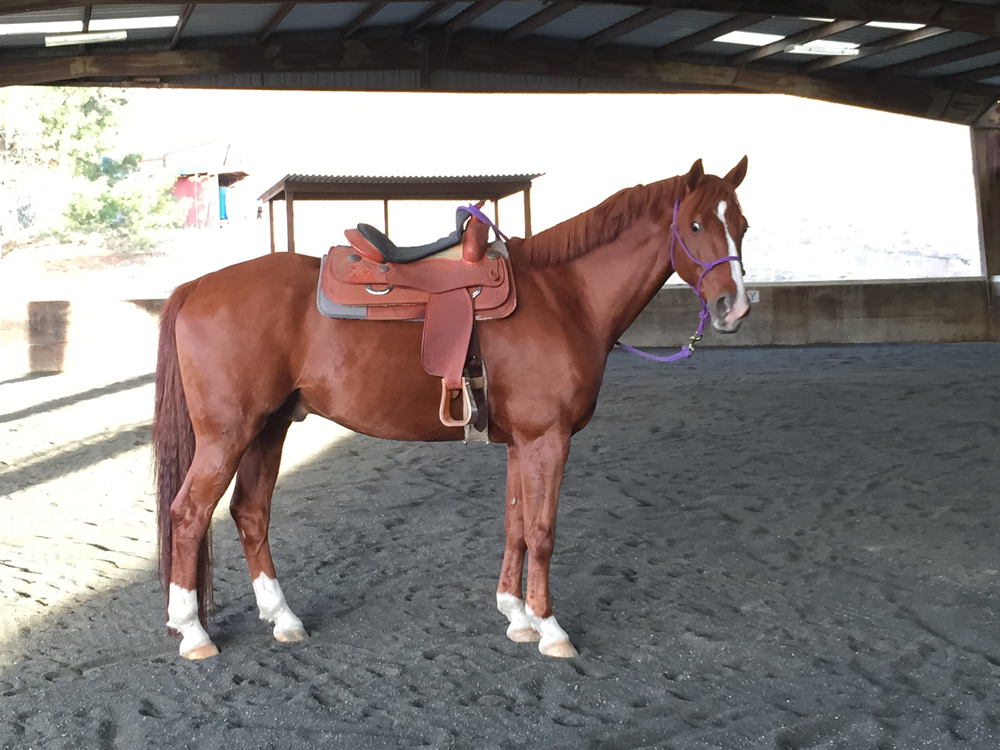 That’s right, I got my (purple) rope halter and I went back to groundwork school. How many of us forget the fact that our horse’s riding problems are directly related to his behavior on the ground? How many show jumpers do you see practicing real groundwork as part of their warm-up on a daily basis?

From the way he dragged his feet, it was clear that Sirocco had experienced no show jumping riders or trainers practicing groundwork. I was rusty myself, and so groundwork became our first step to “soft feel.”

Part of the reason I came to Rawking Horse Ranch was to learn from the variety of horsemanship clinicians who rotate through the farm, and it was through the slow drawl of the first clinician, a Montana cowboy named Chris Ellsworth, that yielding to pressure from the ground was explained (and explained again) as I struggled to make my horse’s feet move the right way.

It’s simple, right? When the horse is yielding away from pressure on the ground, they yield to pressure from the leg. Chris Ellsworth focuses on Western horsemanship, but his grounding principles of kindness and listening to the horse were right on the same track as cowboy dressage.

We solved all kinds of problems right there on the end of a lead rope, and in slow steps I began to find a more willing attitude inside my resentful horse.

Sirocco and I evolved. It’s funny how the lighter you are, the more the horse wants to pay attention. How the more consistent you are, the more comfortable the horse gets. These are principles of horsemanship that do not begin or end at cowboy dressage, but as the cornerstones of the discipline, they result in confident, comfortable, and willing horses—who just happen to do cowboy dressage.

The change was not immediate, but it was monumental after just 60 days. Riding in a borrowed Western reining saddle that felt like a house was an adjustment, but the horn sure came in handy a few times. His old riders claimed that Sirocco displayed a litany of problems at horse shows, so it was only natural to enter us in the lowest-stress show environment I’d ever encountered.

At the Cowboy Dressage World Gathering and Finals, everyone was invested in the comfort and happiness of the horses. How often can you say that about a competition of any discipline, and truly mean it?

The show attracted a wide variety of riders and horse breeds from around the world (including just one other warmblood!) to the Murieta Equestrian Center in Sacramento, Calif., on the first weekend of November.

Given that Sirocco and I both have a lifetime of hunter/jumper competitions under our belt, I entered the amateur walk/jog division with confidence. I dressed the part in Wranglers and a funny looking neck kerchief (kept my helmet on though, there are some Western traditions I can’t support), and gave my horse the best A-circuit show grooming the cowboy dressage world had ever seen.

The weeks of soft feel, careful schooling with light aids and practice tests were paying off. We could go from working jog to “free jog” on a light rein. We could stop square, most of the time. It wasn’t perfect, but it didn’t have to be. The fact that my horse was reacting to all of it with a happy expression and a willing attitude was completely, 100 percent perfect. 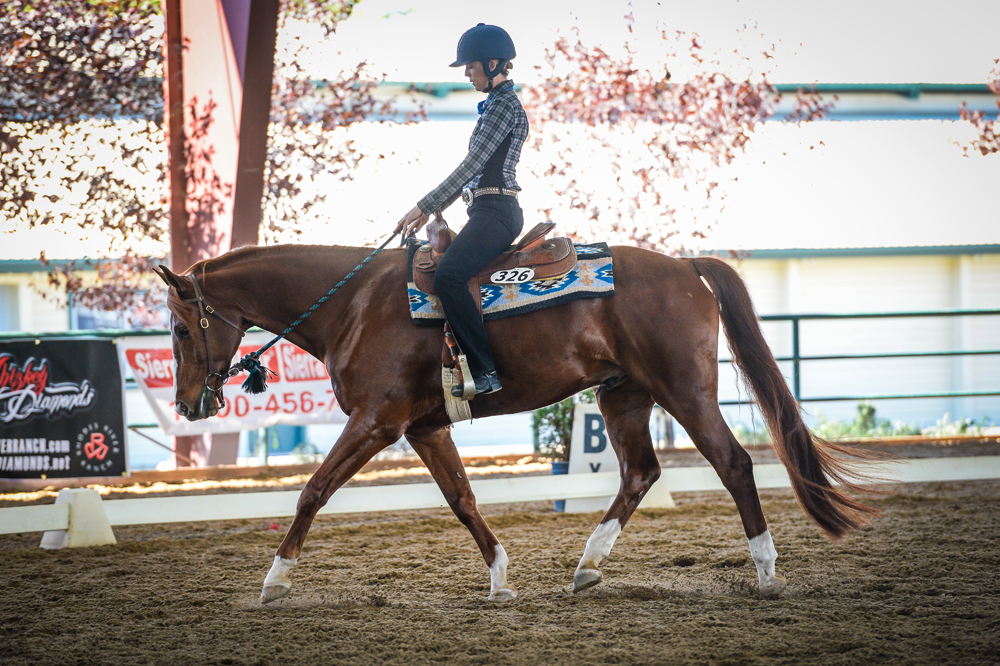 All any horse wants is consistent riding and a human with no ego and endless patience. Cowboy dressage seems to attract these riders, to a one. You know the saying that goes something like, “there are no problem horses, just horses with people problems”?

Well, there are very few people problems in cowboy dressage.

When I go back to my discipline of choice, I’ll take these principles with me. Every horse deserves to be given a chance to respond to light aids. Every horse can be ridden on a soft feel. It’s just a matter of being willing to take the time to ask.

Cowboy dressage showed my burnt-out hunter/jumper the solution to his people problems. By the time we entered the arena at Worlds, we were both comfortable in our Western getup.

I put my rope reins forward and down like I’d practiced, and Sirocco picked up his slow jog. Sure, his warmblood step looked fantastic next to a herd of Quarter Horses, but it was our partnership that earned us scores in the upper 70s, as well as a big, oversize purple ribbon at the end of the weekend.

I have no problem being the 2015 Cowboy Dressage Reserve High Point Walk/Jog Amateur Champion! No problem at all.