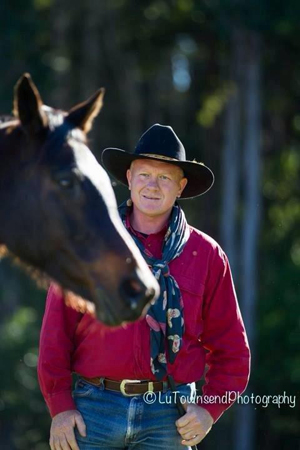 Phil Monaghan’s first recollection of being horseback was being doubled in front of his dad in Coolah NSW where Phils dad (Phil Snr) was working as a stockman. From this early age Phil always felt an affinity with horses and had a desire to do it well. After all the name Phillip is derived from the Greek name Phillipos ~ meaning “Friend of horses.”

During his high school years Phil was offered a bribe (either a horse or a motorbike) if he did well in his end of year report card. A horse it was. Keeping to their word Phil’s mum and dad bought Phil an unbroke $110 dollar palomino filly.

From there Phil enjoyed trail riding around town with his mates as well as local gymkhanas. Phil excelled in sporting events as it filled a need for speed, being judged on time, and didn’t require expensive gear that was out of his families reach.

Over the years Phil has had a desire to learn and excel. This has led to Phil studying in person with some of the world’s best as well as absorbing as much as possible in books, video and any source available.

Phil says, “I remember asking my dad once, How do you ride? His reply. “One leg each side and your mind in the middle.” I thought that was pretty smart at the time. However I think he stole it from a John Wayne movie, but it’s always stuck with me.” Phil can be found on Facebook.