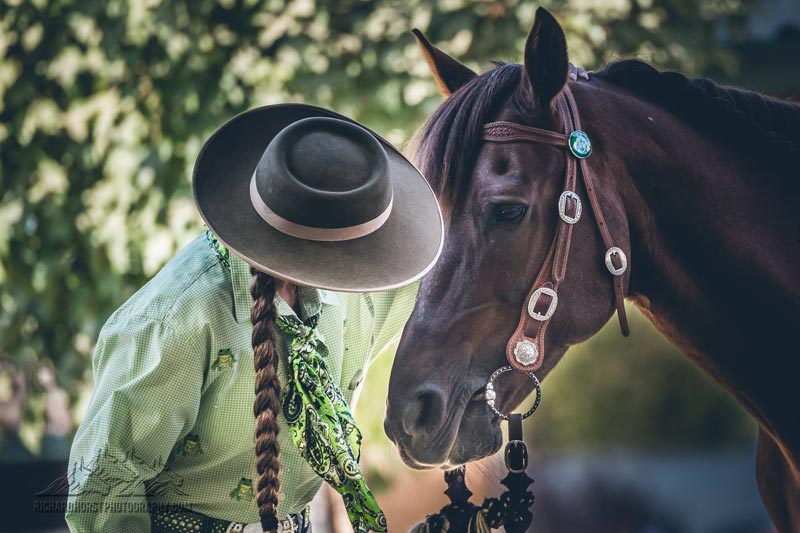 The Cowboy Dressage community is unique in many ways.  When your guiding principle is kindness and soft feel you invite a certain class of people that are anxious to not only embrace that ideal but cultivate it in others they meet.  For me personally, embracing the ideals of Cowboy Dressage has made me a kinder more accepting person.  We ask that new converts to our community join us in a “handshake” agreement as they enter our world of kindness and soft feel.

The handshake was Eitan’s idea, and it stems from the tradition of the Code of the West.  There was a time when your word was your bond; when integrity meant more than success.  There was a time when somebody looked you in the eye and shook your hand you knew they meant what they said and only a cad and villain would go back on their word.

In today’s society, things that were once simple and black and white seem to be continually shrouded in areas of grey.  This isn’t always a bad thing, as we are increasingly aware of the many differences in our fellow human beings and the different ways in which they live, love, and worship and we struggle to grow as a society in our acceptance of the many differences we encounter.  However, the grey areas have seemed to leach over into other previously black and white notions such as integrity and right and wrong leaving things much more open to interpretation.  Even something that was once as simple as lying or telling the truth is broken into calibers of lying including, “white lies, lies of omission, altered notions of truth and differences in perception”.  Now it seems it’s more the intent of the lie than the actual lie that matters.  If you didn’t mean to create harm then what’s the big deal if you tell the truth or lie?

This is the society that we live in today.  It is full of social media and quickly altered stories told with different spins and perspectives based largely on which side of the events you were standing on when they occurred.  Truth and reality are no longer so easily determined.  If you think I’m being a bit harsh, just look at the current political environment we are experiencing.  Both sides are firmly convinced the other side is not only lying but ignorant of real hard true facts as well.

In my mind, all of this grey out there in the world makes the Cowboy Dressage Handshake that much more relevant and important in our crusade to bring soft feel the western equestrian community.  When we began the competitive venue of Cowboy Dressage, Eitan wanted there to be only one rule: Be kind to your horse and others.  As the community grew it became obvious that “kind” was one of those grey words.  It means different things to different people.  So we started creating rules of engagement for our gatherings.  It started with a small list and has since grown to include 30 some pages.  Each rule was created by an incidence that was met with grievance at a Gathering.  And so like the warning on McDonald’s coffee telling you the contents are indeed hot we started adding more and more rules to ensure our members continue to do what’s right, fair and within the handshake agreement.

As a firm believer in the handshake, I believe each and every rule that we write diminishes the strength and integrity of the handshake.  Let me tell you a story of how a well-meaning, but somewhat mischievous young boy learned to go around the rules at a very young age.   When my brother and I were young we lived near a creek with steep banks that ran right through our back yard.  We often played in the creek on hot days with minimal supervision as was much more common in those glorious days of sunshine and bell bottom pants.  One day my brother, being a fairly well behaved child came in to ask my mother if it was okay if he rode his big wheel down the bank into the creek.  My mother, appalled at the thought told him of course he couldn’t ride his big wheel down the bank into the creek?  What was he thinking, he would break his neck!  She told him to use his head and do something that was both fun and safer than that.  So twenty minutes later she was alarmed to hear blood curdling screams coming from the creek.  Sure that he has disobeyed her she ran out fuming to find he had not ridden his big wheel (after all that had been prohibited) but his scooter down the embankment.  In my brother’s mind my mother had not EXPRESSLY forbidden the scooter but told him to do something fun and safe.  He figured he was safer standing than sitting and off we went.

But, if you embrace the spirit of the handshake and the community of kindness and soft feel you always have something to fall back on to help you make your decisions.  It’s the handshake that makes the community at a cowboy dressage gathering feel so different and welcoming and refreshing to those that are new to the discipline.  If we lose sight of that we lose sight of who we are and where we are going into the future and ultimately we become just another horseshow group.  That absolutely cannot happen.

So, to my fellow Cowboy Dressage community members I urge you to re-read the handshake agreement from time to time; especially before coming to a Gathering.  Remind yourself as often as necessary who we are and why we are here.  If you have to go back to the rules to see if you are allowed to use a certain piece of tack, maybe ask yourself why you need it?  Is it promoting soft feel or is it so you may be able to get a few more points on the court.  Would you handle your horse that way if Eitan was sitting on the rail watching?  Make your decisions for the good of your horse, your fellow rider, and ultimately for the future of cowboy dressage.  I want Cowboy Dressage as Eitan and Deb first visualized it to live on long after we are gone.  Establishing a history of integrity early in our years, in the face of a quickly growing competitive environment is essential.  Embrace it and live it my friends.  Ride on in softness and one day we can say we were there when the whole thing started and it hasn’t changed a bit.