One of the very appealing things about Cowboy Dressage for many riders is the ability to ride with two hands on the reins.  While many English riders may wonder what the big deal is, for Western riders, this is a revolutionary concept.

Traditionally in most Western disciplines, only the very green horses that are being ridden in either the snaffle or the hackamore may be ridden with two hands.  The reasons for this are many including the need for the Western rider to be one handed and able to rope or open gates or swat belligerent cattle.  For the most part, the bits that were used in the majority of western disciplines once the horse was out of the snaffle were solid mouth pieces in various configurations and the horse was expected to neck rein, moving off of light pressure on the neck with minimal pressure on the bit.

With a solid mouth piece, no matter the configuration, isolation of cues to the individual sides of the horse’s mouth are minimal at best.  Add any length of shank to that solid mouth piece and isolation of cues to a single side become even less.  Solid bars with long shanks are bits designed to be used with one hand on the reins and are most effective used in that fashion.

In order to effectively ride with two hands and give independent signals to the horse’s lips, bars or tongue for independent control of the head, neck and shoulders, a broken mouth piece is required.  In the past, the most common option for riding in a shanked bit with a broken independent mouth piece was the Tom Thumb snafffle.  This is basically a regular snaffle bit with long shanks allowing for some action as a leverage bit as well.  The problem with this bit is that it really works best if the hands are used completely independently.  Any dual pressure on the reins caused a nut cracker effect on the bars and lower jaw of the mouth often resulting in a resentful and uncomfortable horse that would soon brace or root against the bit.

Today we have many more effective bits to choose from.  There are several different styles of bits with western shanks and broken mouth pieces that have barrel attachments changing the nature of the bending of the center piece of the bit.  These bits are very movable and allow for isolated cues to the lips, tongue, bar, and because they are shanked leverage bits to the chin and poll as well.

With one of these bits a horseman is better able to give subtle, yet easily determined signal to the horse effecting change in the head, neck, jaw, shoulders and front legs of the horse.

Here is one example of such a bit.  This is a low port 3 piece barrel bit with cavalry cheek pieces made by Myler Bits. 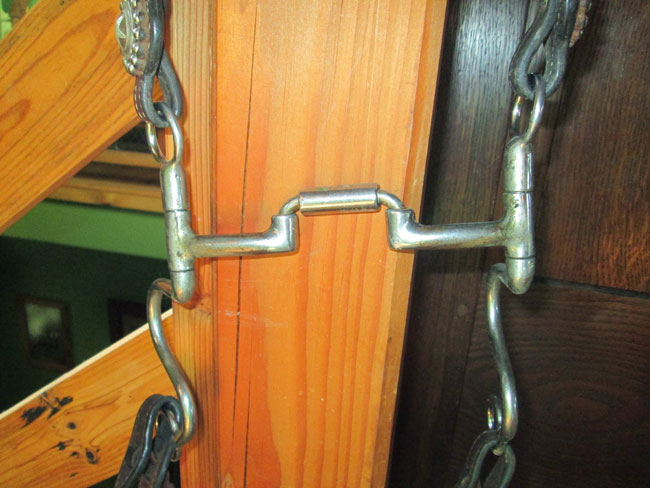 Because this bit is hinged and moves in three independent places, lifting on just one rein can send a signal to the lips and bars of just one side of the horse’s mouth as seen in the picture below. 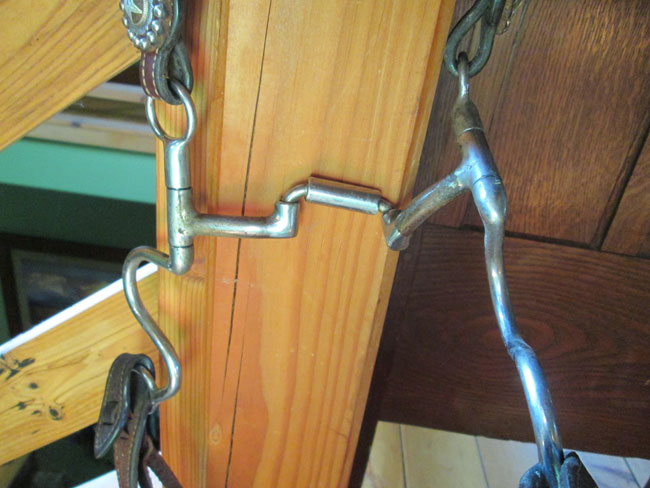 When applying pressure to both reins simultaneously the bit will function similar to a standard leverage bit without collapsing like a Tom Thumb shanked snaffle.  The three pieces and barrel in the middle of the bit prevent it from collapsing on the horse.  This bit functions quite well with both two hands and one making it an effective transition bit for a horse and allowing the rider to give precise cues for advanced maneuvers. 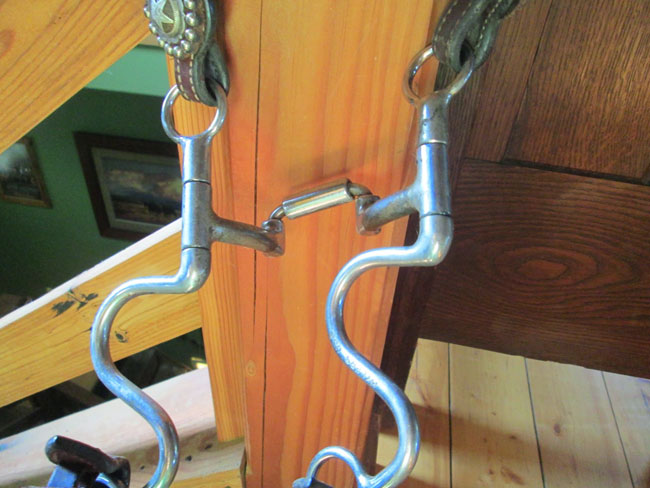 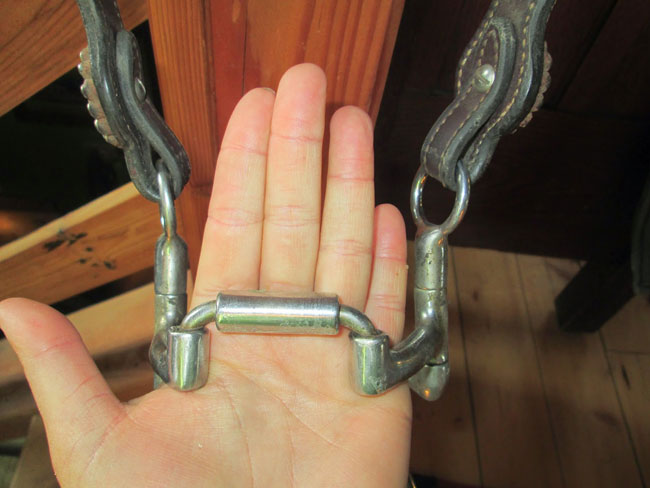 Cowboy Dressage calls for both lightness and precision in communication with your horse. Using tack that aids in that communication while remaining true to the Western traditions is important.  In order to attain higher levels of horsemanship it is necessary to move to higher functioning equipment.

While all of the maneuvers in Cowboy Dressage can and should be taught to a horse in the snaffle bit or other simple two handed piece of tack, as the horse progresses and improves in his understanding he can move into a bit that allows for more subtle cues.

Deciding which of these bits is best for your horse takes a certain amount of trial and error.  Because these bits have much more independent moving pieces than a regular snaffle they can offer a lot of cues to a horse.  A horse unprepared for that much movement in his bit may interpret those cues as noise.   Always make transitions to new bits slowly allowing the horse some time to wear the bit without interference before offering soft cues.  If you are in the habit of always offering cues with the softest feel you will quickly feel the response in your horse before making too much movement in the bit and intimidating a horse that is new to the sensation.

Intimate control of the body parts, including head, neck and shoulders, rib cage and back and hind quarters requires the use of all of the independent aids.  Two hands on the bit aid in isolation and signal for better control of those body parts.  The difference between a broken mouth piece and solid mouth piece is immense when isolating those signals.